The last two years have witnessed a migration crisis in Europe the likes of which hasn’t been seen in 70 years. Though there have been plenty of migrations of people throughout the world over these decades, we in The West have been blissfully unaware because these migrations usually didn’t affect us (and there wasn’t 24 news coverage). But with Europe seemingly overwhelmed with immigrants, and with Americans and Canadians 1 fearing they’re next, it’s worth wondering what we’re so afraid of. 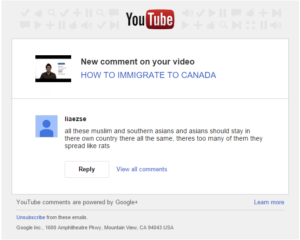 Why are we here?

My relatives first settled in Upper Canada in the 1780s. They settled in what is now Owen Sound, Ontario – at a place hilariously called “Balmy Beach” – because of the American War of Independence. They were United Empire Loyalists. They came here from Vermont. Because of this, at least one branch of my family has been here longer than yours has. (So there.)

I don’t actually know why they came; whether or not they came because of the war, or for some other reason. But my family has decided that they were Loyalists because it’s easier to believe that than to do any research to confirm or refute that belief. When I am showing off my Canadianness, I bring this up: my family has been here since the 18th century, beat that.

I tell you all of this because my Canadianness is dependent upon how I tell the story: if I trace my lineage back to the Loyalists, I am more Canadian than you. If I spin it the other way, and neglect to tell you where my father was born, you might think I was practically fresh off the boat. 3 So my nationality, such as I have one, is a narrative construction.

Of course there were human intentions in all of this, but we don’t usually get exactly what we want (if we ever do) and none of these people, except my parents, intended that I, specifically, should live. 4

Given that my birth in Toronto at the end of the 20th century was just an accident, and given that the degree of my Canadian nationality is a narrative construction, I wonder what makes me more Canadian than the person who recently became a Canadian citizen, who chose to become a Canadian citizen by immigrating to Canada and by remaining a permanent resident here long enough to qualify for citizenship?

The answer to that question is: nothing. We might even argue that the person who naturalizes as a citizen feels this citizenship even more strongly because they had to work for it. I didn’t have to work for it. I was born a citizen by a long series of happy (and perhaps not so happy) accidents.

Regardless of who is more “Canadian” in this case, we are united in something, both those of us were born here and those of us who naturalized in the past: we think we deserve our citizenship and, if we consider ourselves Canadian nationals, our nationality. But those new people don’t. Why? 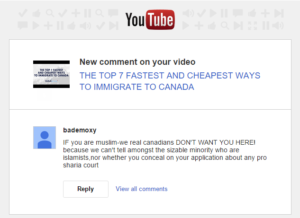 The Entitlement of Place

Though my birth in Toronto, Ontario in the late 20th century was just the result of a series of happy accidents, I feel like I deserved it, like it is my entitlement, my right: I am a Canadian citizen and a Canadian (nationally and maybe even ethnically at this point?) and you cannot take that away from me. Sure, you can’t actually take it away from me without removing the political entity that is Canada, but that’s because we have the rule of law. In reality, there is nothing that makes me more deserving of this than anyone else. We have arbitrary borders that have come to exist over centuries or millennia (sometimes only decades) and we imbue these borders with all sorts of meanings that are made up, just like the borders. I didn’t deserve any of this; it’s just accidental.

But I don’t believe that for a second, nor does anyone else who was born in Canada or the US. We all believe we deserve our citizenship and nationality. Our parents, our grandparents or other ancestors did something for us to deserve it. They struggled etc. (I say et cetera because we’ve all heard this before – it varies from person to person but we all have these stories, in North America, of how our ancestors came here and made this country our home. My story is better than yours, by the way. My ancestors’ struggle to come to Balmy Beach from Vermont was way more of a struggle than the struggle of your ancestors. I mean, it was the 1780s for chrissake. Life was hard.)

And if I know (and like) an immigrant who has been here for several decades, I know they deserve citizenship and nationality (if they want it – they better want it) because I know of their struggle. I know how they came here and how hard they have worked to fit in. They really are unique.

So we should we should make it harder for people to immigrate. It doesn’t matter if we have an insanely low birthrate and don’t have anyone to power the economy in the coming decades. Maybe I’ll be dead by then so what do I care? We need to create barriers to keep these new people out, those who want to get citizenship easily. If they really want it, they should have to work for it. I may have no idea how hard they have to work for it now, but they don’t have to work hard enough. They should have to work harder. No matter what they endured, no matter what war they’ve fled, they haven’t worked hard enough to earn what is rightfully mine.

The Just World Fallacy and Entitlement of Place

That’s what it comes down to: we feel like we deserve citizenship and nationality more than those we don’t know. If we know and like someone new, we think they deserve it. Otherwise, we decide that it’s only those of us who lucked out to be born here that deserve it. And we believe this because we think the world is fair: that somehow we earned our happy accident of birth. Nothing could be further from the truth, but we believe it. And nothing – certainly not this article – will ever convince us otherwise. Unless we have some kind of transformative experience wherein we can see immigrants as actual people.

It’s our belief in a fair universe that allows us to rationalize all these ideas that immigrants and refugees should not come to our countries – or cannot come to our countries because they will damage our countries. We think they deserve to have been born in the places they are fleeing and deserve to spend their whole lives there. If the situation was reversed, we’d feel differently, but it isn’t: I was born in Toronto and someone else was born in Aleppo. This was an accident but I sure as hell won’t admit it: I deserve my Canadianness and that Syrian deserves his Syrianness and, if you are willing to take it far enough, he deserves his accidental death from being born and growing up in the wrong country.

Our belief in the fairness of the universe is just a defense mechanism. It’s a defense mechanism to cover our fear: our fear of difference and our fear of change. We really don’t want new immigrants because they are different and because they bring change. They are different because they don’t look like us, they don’t talk like us, they don’t worship the same god, they don’t play by the same rules, they don’t know how to behave in the swimming pool. And they bring change: we remember what it was like before “mass immigration” (conveniently forgetting about how we live in a country of immigrants, which has never not experienced “mass immigration”). Like all good humans, we idolize the past and bemoan the present. We see the changes – be they economic, cultural, social or otherwise – as more negative than positive (even though the reverse is true for nearly all of us) and we want someone to blame. Toronto already looks extremely different than it did when I was born, it must be all those different looking, different talking people that caused these changes I don’t like. And if we let more of Them in, it’s just going to get worse. Toronto’s already a cesspool for chrissake… 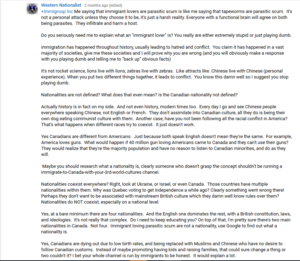 The Just World Fallacy hides our fear. It convinces us that we deserved our accidents of birth so we can build up arguments we think are rational and logical to condemn The Other, the less fortunate, the less lucky. The Just World Fallacy is allows to pretend that racism and cultural chauvinism are somehow defensible because we earned our civilization and those parasites in other countries deserved their lack of civilization. That’s why we hate immigrants, because deep down we know that we don’t have a leg to stand on. Immigrants and refugees fleeing their home countries are a constant reminder that life is not fair, that we’re lucky, that we didn’t earn what we have, we just lucked out. And we don’t like that. So go home and stop diluting our culture with your immigrant mentality.

One thought on “Why We Hate Immigrants”

Get Updates in Your Mailbox

This website uses cookies to improve your experience while you navigate through the website. Out of these cookies, the cookies that are categorized as necessary are stored on your browser as they are essential for the working of basic functionalities of the website. We also use third-party cookies that help us analyze and understand how you use this website. These cookies will be stored in your browser only with your consent. You also have the option to opt-out of these cookies. But opting out of some of these cookies may have an effect on your browsing experience.
Necessary Always Enabled
Necessary cookies are absolutely essential for the website to function properly. This category only includes cookies that ensures basic functionalities and security features of the website. These cookies do not store any personal information.
Non-necessary
Any cookies that may not be particularly necessary for the website to function and is used specifically to collect user personal data via analytics, ads, other embedded contents are termed as non-necessary cookies. It is mandatory to procure user consent prior to running these cookies on your website.
SAVE & ACCEPT